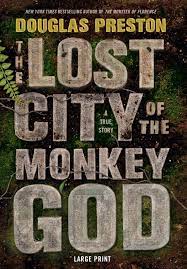 This month’s selection is The Lost City of the Monkey God by Douglas Preston. A five-hundred-year-old legend. An ancient curse. A stunning medical mystery. And a pioneering journey into the unknown heart of the world’s densest jungle. In 1940, swashbuckling journalist Theodore Morde returned from the rainforest with hundreds of artifacts and an electrifying story of having found the Lost City of the Monkey God-but then committed suicide without revealing its location. Three quarters of a century later, bestselling author Doug Preston joined a team of scientists on a groundbreaking new quest. In 2012 he climbed aboard a rickety, single-engine plane carrying the machine that would change everything. Books are available to borrow. This discussion will take place outside, weather permitting. Zoom will be used as a backup plan if the weather is bad.

Registrations are closed for this event. Please send an email to staff@harwintonlibrary.org, to be put on a waiting list. A staff member will call if a spot becomes available.